The LA Times: “Costumes, props from ‘Boardwalk Empire’ up for auction”

Wardrobe items and props from HBO’s Prohibition-era series “Boardwalk Empire” are going on the online auction block this weekend.
Starting Sunday, collectors and fans will be able to bid on period-appropriate costumes, accessories, furniture and even china that appeared over the course of the Emmy- and Golden Globe-winning show’s five seasons.
A selection of 524 pieces (but not everything that will eventually be auctioned off, we’re told) can be previewed now at screenbid.com, including the gold-colored cuff links worn by the series’ Al Capone character in his final scene, the black homburg Steve Buscemi’s Nucky Thompson sports in the opening credits and a wooden liquor crate with the words “Old Jamaica Rum” stenciled on the side that contains three (empty) liquor bottles.
But the big draw here will likely be the ’20s-era costumes; things like embroidered fur coats, showgirl outfits and macrame dresses on the women’s side and tuxedos, bold pinstripe suits and tuxedos on the men’s side.
Die-hard fans of the show (pun fully intended) might be interested in bidding on the suits that Jimmy Darmody and Chalky White were wearing when they made their respective exits. (They aren’t posted to the auction site yet but they’re the two suits in the above photo.)
It’s worth noting that HBO has partnered with Screenbid for the auction, so not only is there a verifiable chain of custody to the items but also extremely detailed information accompanying each item up up for bid.

The auction is set to begin at 9 a.m. PST Sunday and end on Thursday. 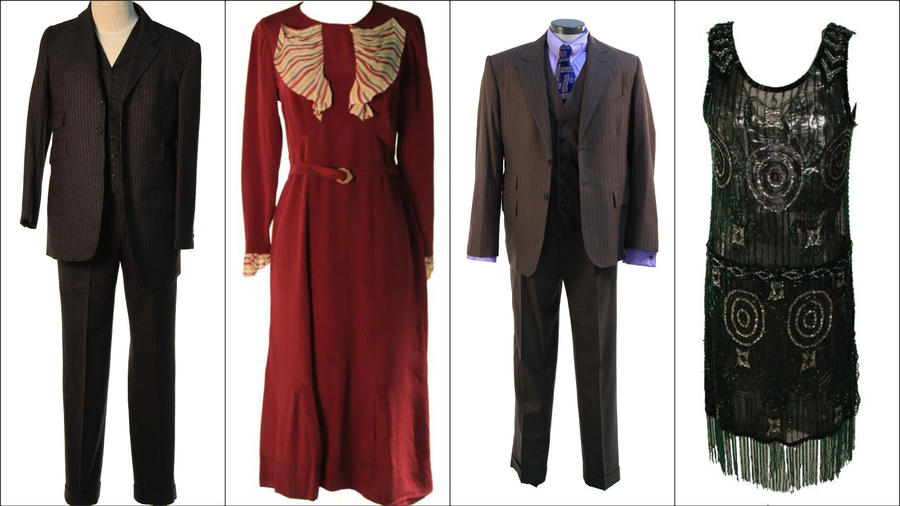 “Boardwalk Empire” wardrobe pieces that will be auctioned off starting Sunday include, from left, a suit worn by the show’s Jimmy Darmody character, a dress worn by Margaret Schroeder, the last suit worn by Chalky White, and a sequin evening dress worn by Sally Wheet.