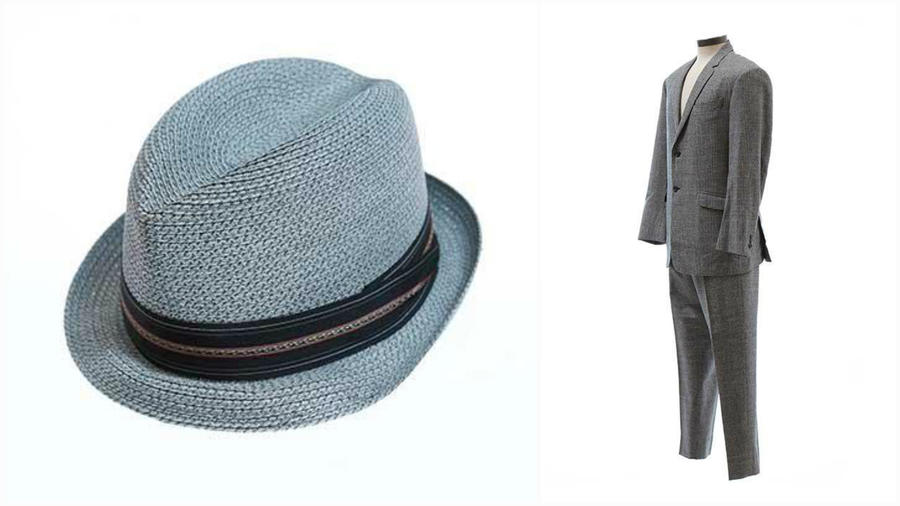 Among the “Mad Men” items up for bid at online auction starting July 31 are a blue straw Pinzano fedora, left, and a Brooks Brothers suit, right, both worn by Don Draper over the course of the show’s seven-season run.

If you’ve always wondered what it’s like to walk in Don Draper’s shoes — or Betty’s or Ken Cosgrove’s — thanks to an upcoming auction of “Mad Men” props, set pieces and costumes, you may have the opportunity to find out.

Organized through online auction house ScreenBid in coordination with Lionsgate Entertainment (which is providing certificates of authenticity for each item), the “Mad Men” auction consists of 1,384 different lots that serve up a variety of items ranging from the truly mundane — things like canceled checks and a re-created Budweiser beer can — to near unicorns like Don Draper’s beloved 1965 Cadillac Coupe de Ville.

A quick glance through the offerings (which can be previewed in advance of the auction at ScreenBids’ website) turns up lots — and we mean lots — of the tiny pieces of set dressing that made the period show (which spanned from the late ‘50s to the early ‘70s) such a joy to watch; a collection of magazines (from 1967) from the Draper home, time cards, hot water bottles, concert posters and all manner of ashtray.

There are enough pieces from Don Draper’s closet to practically build “Mad Men’s” star ad man from scratch including random pieces like a brown cashmere V-neck sweater (from Season 4), madras shorts (who knew Don wore J. Crew?), gold-framed sunglasses (in a Ray-Ban case), gray and black plaid pajamas (from Brooks Brothers), and, of course, a range of sharp-looking suits (many by Brooks Brothers, a frequent go-to resource for Bryant) including a blue and black checkered wool number (size 42 regular). To complete the look might we suggest a blue straw stingy-brim Pinzano fedora?

There are personal effects from other men too, including a light blue Brooks Brothers suit with light red stripes worn by Pete Campbell and a monogrammed tie clip worn by Roger Sterling — which might pair nicely with the silk Lanvin necktie roger wore in Episode 6 of Season 6 and is also up for bid — or Bert Cooper’s burgundy robe.

Where the auction seriously falls short, though, is on the women’s side of the equation with (unless we missed a page somewhere) nary a garment to be found. Instead, what’s on offer are housewares, accessories, costume jewelry and shoes belonging to “Mad Men’s” various women; Marie Calvet’s bright pink Samsonite luggage for example, a silver Claddagh ring worn by Peggy and a floral patterned makeup bag used by Megan Draper in Season 7. The sole exception was in the footwear department, though the most memorable pair of shoes on offer were a killer pair of red suede Joseph Larose stilettos worn by Joan Holloway (size 8.5).

Potential bidders should note that winning bids will have an additional 24% tacked on top (known as the buyer’s premium) and that shipping and handling is not included. Those details, as well as bidding instructions, can be found at www.screenbid.com, with online bidding set to begin tomorrow at noon PST and the first lots starting to close on Aug. 6 at noon PST.

Oh, and if you really do want to walk in Don Draper’s shoes, you better be either an 11 ½ (for the Brooks Brothers brown wingtips) or a 12 (for the black Florsheim lace-ups).